Many years ago, programming the memories in an amateur radio was a “neat” feature.  As the capability was included in more radios, the radio manufacturers also began charging a hefty sum for the cables to do so, because they contained “Circuitry”.  Many amateurs quickly learned that these adapters were little more than RS-232 to TTL converters – often including a MAX232 chip.    Some worked well with a simple 2 transistor interface, others did not…

Over the years, I began purchasing cables for my radios, until I found my VX-7 required a cable, and many others had found a way to use the VX-5 cable with some audio adapters.  The lightbulb came on – I began realizing that the ADMS cable used for my VX-5 did the right level shifting, and could easily be adapted for many other radios…   the results of that experimentation are contained below.

My cable was from a VX-5R radio, and was also useable on the FT50 and many other Yaesu handhelds at the time. This is the connector on the end: When you get down to it, this cable essentially contains a RS-232 to TTL converter… so it has uses even for small projects such as testing TTL-output GPS units, etc.

Now – here are some cables and adaptors to use this cable for other radios:

Use as-is for the following:

A completely off the shelf solution – all that is needed is: 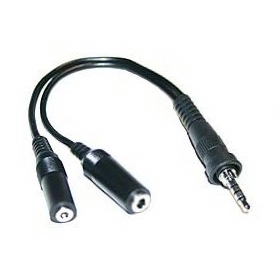 jumper pins 7 and 6
Pins 8 and 5 to program and ground, respectively.

More off-the-shelf solutions! RS/GRE use the same adaptor as Icom – a 3/8″ stereo jack to mono plug…